SPRINGTIME IN THE ROCKIES!

Howdy all,
There are few times of the year more soul-satisfying than the break of winter in the Rocky Mountains of the west. Life in Polson has been warm and peaceful. I've been spending this last week enjoying the vices of western Colorado, visiting with family and getting a few turns in on the mountain. 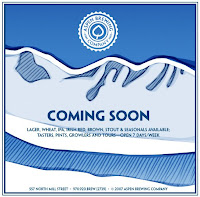 I also got a chance to visit with the fine folks at the Aspen Brewing Company located (wait for it!) in Aspen. They have a 7bbl system with a couple of fermenters; a modest but attractive tasting room and plans to pour several different types of beers. They are located in a "working-man's" part of Aspen.
I know, that seems like an oxy-moron. But, beneath the glitz and fantasy-land persona, the gears of Aspen (and similar resort towns: Whitefish) are lubed and turned by people who do the manual labor jobs, the trash-hauling, the food-serving, the beer-making. Without this work force, these high-priced destinations would be nothing more than the ultra-rich standing in a field, throwing their money at each other. Okay, enough of the soapbox. The ultra-rich, and rich, and moderately well-off also contribute quite a bit to these areas. They provide the funds that provide the grease! Very important.
But I digress. The Aspen Brewing Company faces a challenge. Due to where they are located, the powers that be in the Town of Aspen have decided that the Aspen Brewing Company will be allowed to serve their patrons one pint of their beer in their tasting room, a restriction that any Montana brewery can understand. A specially-zoned area was created by the Community Development Department in Aspen to provide businesses with lower rents to facilitate more small, local enterprises. In the creation of this area, bars and restaurants were prohibited. Even though microbreweries in Colorado are not restricted at the federal or state levels on how much product they can serve in their tasting room, the Aspen powers have decided that a tasting room looks too much like a bar and have therefore placed the "one-pint restriction" on them as well as prohibiting the display of sporting events on their televisions!
Now, the principals of the Aspen Brewing Company are not taking this lying down. They will be attempting to change this ruling on the 24th of this month. They are asking for as much positive public comment to the Aspen City Council as they can get.
If there is a villain in this, it seems to be the Community Development Department. This department's aim, when they are placing the restrictions on the brewery, is to preserve the character of Aspen. Now, this gets a sarcastic-laugh out of me. I grew up in this valley. I attended first-grade through high school down-valley in Basalt. Most of my early jobs were in Aspen or Snowmass. The "character of Aspen", the true character of Aspen was bull-dozed, rebuilt, painted, bull-dozed again, rebulit again, and again and again. The "CHARACTER OF ASPEN" is "remodel-rebuild-inflated pricing". Any old-time Aspen charm is very difficult to find in town. Aspen is less a town and more of a corporation. 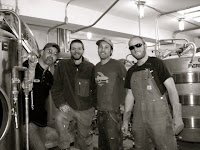 I wish Duncan, Brad, Rory, and Terry the best of luck with their venture. They have a great idea, pretty good location (zoning not-withstanding), and seem to have a lot of the true old character of aspen, the character that keeps this town running.
Prost!
Your humble brewer

(Photo courtsy of PlumTV: http://aspen.plumtv.com/stories/new_brew_town)
Posted by Glacier Brewing Company at 8:35 AM No comments: 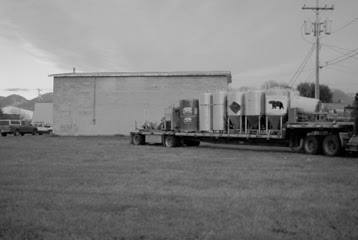 This picture was taken back in February of 2003. This is the brewhouse and cellar vessels arriving at their new home via flatbed truck. Notice the yet-to-be-painted-white wall of the brewery. For those of you who have never heard the story, here goes:
The idea of the Glacier Brewing Company began several years ago, maybe almost a decade now. At that time, my wife (then she was my girlfriend), Christine was employed as a seasonal Ranger-Naturalist in Glacier National Park. The rest of the year, we both lived in Fort Collins, Colorado. I would drive up to Montana with Christine every May from Fort Collins to get her ready for the summer season in the park. For the rest of the summer, I would stay in Colorado and work at my job; keg washer and bottler for the H.C. Berger Brewing Company. It was on one of these trips up north that we were driving through Wyoming (just outside of Rock Springs, I think), Christine was asleep and I was trying to find something redeeming about Wyoming when, like a bolt from the blue, I suddenly had the idea of opening a brewery and restaurant (I didn't know any better back then!) outside Glacier National Park and call it........(wait for it!).........the Glacier Brewing Company!!! Now, not only did the name come to me right then, but also some of the beers: Golden Grizzly Ale, North Fork Amber, Back Country Bock (we can't legally make true bocks in Montana), and several others that either died a quiet death or were reworked into today's beers and sodas. 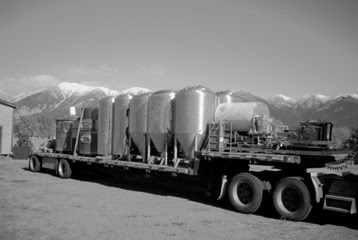 Well, upon returning to Fort Collins after that trip, I quickly set about to record my ideas on paper, including a full sketch of the outside of the brewery/brewpub and a layout of the inside. I still have them around somewhere. I would dust off this idea through the years and share it with those who are near and dear to me. The deeper I got into brewing, the more tangible this vision became. It wasn't until I had been brewing at a brewpub in Telluride, Colorado for a couple of years that "THE IDEA" really started to kick. It was early spring. The town was almost empty and Christine's brother Bob came for a visit as he was going on trip to Death Valley (if you know Bob, you understand) and he was going through some life changes, as well. Christine, Bob, and I were having lunch at the brewpub and were talking about the future. One of us brought up the idea of the Glacier Brewing Company and "what would be truly involved?" (in hindsight, none of us had a CLUE!!!!) After talking about it in detail for awhile, a strange quiet fell over the table. Then, one of us then suggested: "Why don't we just try it?"
Why, indeed.
I began to work on the business plan and started the search for a brewing system. The brewing system project was finished first. I found one on the Internet and we ended up buying it sight-unseen, as is said. I gave notice at my job and two weeks later, Christine and I had our house rented out, the moving truck loaded, our two-year-old strapped into her car seat and we were off to Montana!!!
We arrived on a Thursday, unloaded the truck that night, fell fast asleep, and I was on a plane for L.A. the next morning. I arrived in L.A. (my first trip to California) just in time for Friday rush hour! I made my way to Huntington Beach, found the brewpub (closed for almost a year), it was locked up. So, I found a cheap hotel and planned to meet the seller the next morning.
He assured me that two guys could remove the entire system in two days. A week and two rented grunts later, I loaded the system onto a drop-deck flatbed semi. I gave the drivers directions to the Flathead Valley and got on a plane for Montana. The system arrived in Montana about a week later and we stored it on my father-in-law's Christmas tree plantation in Creston. It sat there for almost a year as we scoured the area for a building to start our brewery. 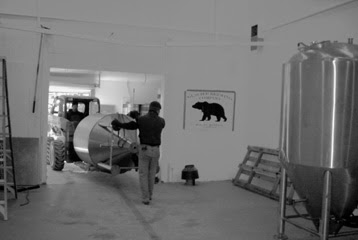 Eventually, Bob called me one day to say he thinks he found our building. I drove down to Polson and had a look. This building was built in the mid 70's as a racquetball court and had since been used by a printer. His bus-sized printing press was still in it. This building was dirty, dusty, oily, and needed a lot of work.
IT WAS PERFECT!
Well, we started to move the equipment in around Halloween and almost five months later, we were brewing our first batch of beer, a very hoppy Golden Grizzly Ale.
We were soon picked up by Earl's Distribution in Missoula, now known as Summit Beverage. Since then, our market has been growing and undulating in some fun and unexpected ways. We've increased our product line beyond our original business plan, we've added bottle product to our line-up, we've added a beer garden, we've expanded our tasting room to an unbelievable size. Who knew that road trip all those years ago would yield such wonderful fruit! 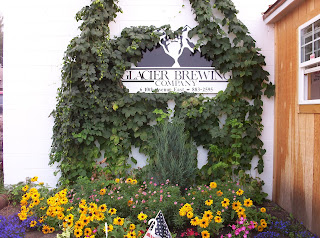 I know it is a very corny thing to say, however, it's true: the longest journey begins with a single step.
Posted by Glacier Brewing Company at 1:31 PM No comments: