Blink of an eye 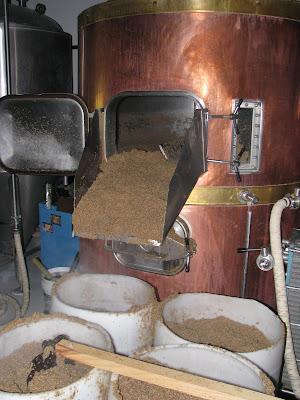 I am always striving to produce 310 gallons of beer. For those of you who have not been through our brewhouse, we have a ten-barrel brewing system with five fermenters and five "brite" tanks. One barrel is equal to 31 gallons so ten barrels equals....yup, 310 gallons. Our fermenters and brite tanks can both hold at least ten barrels. The brite tanks are so named because by the time the beer enters these tanks, it has been fermented and filtered so it is clear and BRITE! 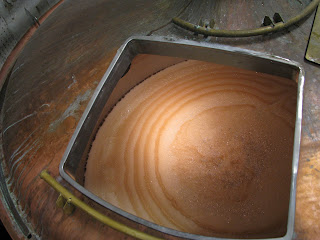 310 gallons is a strange goal to go to work with everyday but it is the one that drives me. I don't always reach it. Sometimes I exceed it. There are several factors that directly affect this outcome.
These include; the quality of the malted grain, the temperature of the brewing water, the speed of the sparge (showering water over the grain to leech out the malt sugar), and the attitude of the brewer. Perhaps the last is the most volatile and can have the biggest impact. Whenever I brew, I strive to repeat my actions from the previous successful brew. I use the same water temperature, I set the grain mill to the same crushing gap, I place my feet in the same place on the brewing platform as I stir the mash. I strive for redundancy.
Being mostly human, I am susceptible to the same idiosyncrasies that haunt us all: inattention, rushing through projects, tiredness, arrogance. Recently, I was reminded how quickly things can go flying off track. How fast a brew can go from producing a fantastic yield to producing something else entirely. 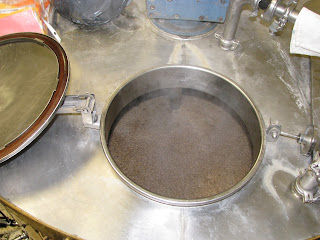 During a recent brew, I was called away. I received a call from my twelve-year-old daughter, whose after school plans had radically and unexpectedly  changed and she required to be picked up, now Dad NOW, in a teen-age minute! This call came in the middle of the extremely important knock-out! During the knock-out, the recently boiled and hopped malt sugar (wort) is pumped out of the brew kettle, through the heat exchanger (to drop the temperature from 208°F to 70°F), and into the fermenting vessel (FV). It is in the FV that the yeast is added to initiate the conversion of the malt sugar to alcohol. When I returned to the restart the knock-out, I caught myself pressing the wrong button on the brew control panel. I was about to shut off the cooling to the heat exchanger. This would send the temperature of the FV skyrocketing and kill the yeast! Our fermenters are designed to cool using jackets filled with propylene glycol that has been chilled to 28°F. If the FV is filled with hot wort, the glycol-jackets can cool the tanks but they would take about two days to do it. The "quick fix" would be to disconnect the glycol piping from the tank, drain the glycol, and pump cold water through the jackets for the next eight hours! Ask any profession cook how important it is to quickly cool down a stew or soup so bacteria doesn't get a foothold. We have to ensure the wort is cooled as quickly as possible. 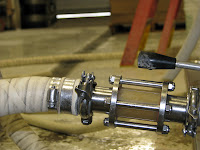 This misstep could cost the brewery several dozen hours of lost labor time, lost raw materials used, and, worst of all, a lost 310 gallons of potential beer! Being a small business, these types of losses hit very hard. Unfortunately, unlike JP Morgan, we cannot absorb losses like this easily.
Back in the days when I was a professional carpenter, doing residential and commercial remodel and construction, the lead carpenter would tell me that "the really good carpenters don't make mistakes and the really great ones know how to fix their mistakes!". Pretty much the same in the brewing world. If you screw up in the brewhouse, you had better by God be able to fix it!
So these thoughts were racing through my skull at light speed as I watched my fingers press the button (in slow motion) that turns off the cooling to the heat exchanger. Of course, I quickly restarted the cooling and breathed a well-deserved sigh of relief. The rest of the wort was pumped successfully in the FV and the yeast fermented the tank, alive and thriving to work another day! 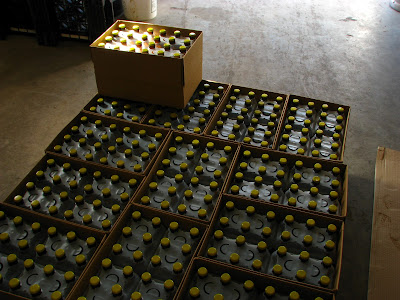 Until next time,
Your humble brewer.
Posted by Glacier Brewing Company at 5:09 PM No comments: 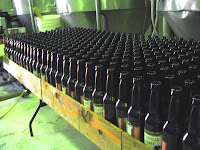 Being in this business for so long, my ear has tuned itself to the various heaves and contractions of our local brewing industry as well as the national scene. What I'm seeing and hearing lately can be summed up in two words:PRODUCTION EXPANSION! Not just the individual breweries, but the industry as a whole. I have been approached for advice and consultation by more start-up brewery projects from all across the country in the last seven months than I have in the last three years! I recently heard one of my brewery compatriots exclaim "It seems like everyone and their brother is starting a brewery!" He is only partially correct. Don't forget their sister, their aunt, their great uncle, their kindergarden teacher, and their third cousin twice removed! 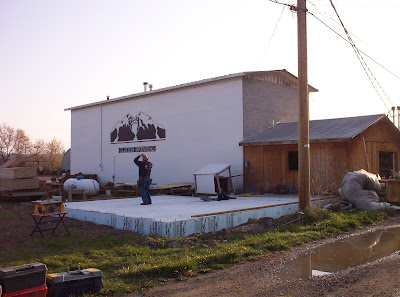 What is accounting for this seemingly national grassroots resurgence in craft brewing? While it is very true that the craft beer market share has done nothing but grow and grow in recent years while others have shrunk! Years where every other segment of the alcohol-sales world has declined (wine, liquor, and macro-brewed beers), craft beer has increased its volume! No mean feat, to be sure! But has the growth been enough to account for the marked increase in production facilities? Truly, only time will tell.
However, this is not the first time we have seen this type of a "land rush" in the brewing world. Most recently, I can recall very clearly how, in the early-to-mid-1990's, every bar, every restaurant, every vacant warehouse space seemed to sprout a brewhouse! I knew that expansion wouldn't last long when I went into a frozen yogurt shop in Fort Collins, Colorado and they had a brewhouse behind the freezers full of pistachio/cappuccino delight! Alright, that never really happened. But, had the "craft bubble" continued for a couple of more years, I would not have been surprised to see a pint of "DMV Pale Ale" for sale at the Motor Vehicle Department!
It seems that this industry might just have a cyclical nature to it ("WHAT?!? SHUDDUP!"). At its core, craft beer and craft brewing are a niche item. Read that as a luxury item. However the big advantage we have over other indulgences is that we offer a very affordable, luxury item. When the national economy is walking through knee-deep muck and loosing its boots in the process, our wonderful craft beer world offers our customers an affordable, enjoyable product created with very high-quality ingredients, produced by highly-schooled individuals. We give the public a chance to enjoy a premium, gourmet experience for a very affordable price. But I am truly digressing!

The pervasiveness of the brewhouse. I am not at all against this. I love the fact that more and more breweries are starting. These businesses are EXTREMELY difficult to get going and KEEP going! Anytime you encounter a commercial brewing operation, please understand that it is a testament to somebody's dream and insane drive!
Are all of these new breweries going to be sustainable in the coming years? No, most likely not. The market for beers brewed domestically (see previous post!) is very contentious and, sometimes, downright cutthroat! As more and more breweries try to get their products on the shelf and behind the bar, the more the macro-breweries (ABInBev, Miller/CoorsSAB, Kokanee, etc.) will fight against any contraction of their share of this golden pie!

So, what is my point? Hmmm......good question....
My point is this: when you come across a small brewery or brewpub, get in there and sample their wares! Some will make you wince, some will make you happy.  As I have previously stated, small breweries are very hard to run. Whoever is doing that is running on pure dream and caffeine! Try their beers. Give them a chance. Shun the macro-beers. Embrace unique beer styles and open your mind and palate! 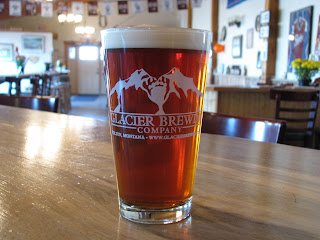 If you truly believe the entrepreneur and small-business owner are the catalysts for our economy, you have just met them in your local brewer and brewery owner!

Until next time,
Prost!
Your Humble Brewer
Posted by Glacier Brewing Company at 11:55 AM No comments: