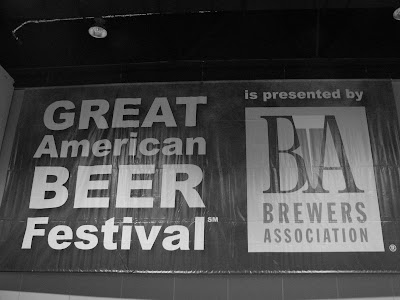 Well, today is the Sunday after the 2009 Great American Beer Festival in Denver, Colorado. We brought four of our beers down to be judged against the best brewer's in the country. 495 breweries, over 3308 beers, and three days later we're heading north, homeward bound. Back to our little corner of Montana. Unfortunately, we did not win any medals at our first GABF appearance. Always next year. We entered our Golden Grizzly Ale (into the Kolsch category), Glacier Select Oktoberfest (into the Marzen category), our North Fork Amber Ale (into the Alt category), and our Slurry Bomber Stout (into the Foreign Stout category). I was able to sample some of the beers that won the medals in the categories we entered.

The winning beer for the Foreign Style Stout category tasted almost EXACTLY like our Slurry Bomber Stout!! I was speechless. But it all came down to that “exactly”. It was just slightly, and I mean slightly, hoppier than ours. Man oh man, you 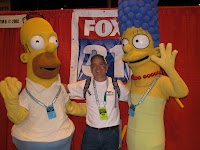 could've knocked me over with a lite beer!

I had the rare opportunity to meet two of my heros: Charlie Papazian and Homer Simpson (Charlie more than Homer)! It is strongly because of this man (Charlie) that this festival exists! He is THE guru of homebrewing and therefore craftbrewing. Charlie, if I can be so honored that you are reading this: Thank You Again. Everyone should reread your books! 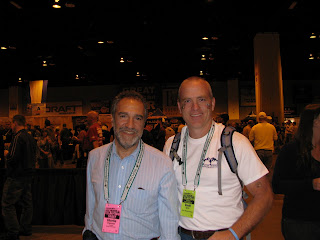 Kudos to Kettlehouse Brewing (bronze medal) and Montana Brewing (gold medal!). There were only about six Montana breweries at this year's festival. 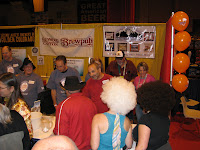 I was surprised by that as I expected more Montana breweries to attend. But, I'll be the first to tell you, it's a long way from Montana to Denver!

The medal ceremony notwithstanding, attending this festival was well worth the thousand-plus mile drive (one-way!). Christine and I walked out with several wonderful marketing ideas, I have a notebook full of beer ideas, and a deeper appreciation for my craft. I had attended the GABF once before but that was with another brewery; H.C. Berger Brewing in 1998.

This time, I went there with MY brewery! I can't fully describe the amount of pride I felt to see our very own beers pouring on the festival floor alongside industry titans like Ommegang, Sierra Nevada (beat us in the Kolsch division!), Pizza Port (huge medal winners!), ABInBev, Coors/Miller, and hundreds more. In the same moment, I felt deeply humbled by the scope of this event and the unique creativity shown by members of our craft brewing industry.

We even saw George Wendt!!! 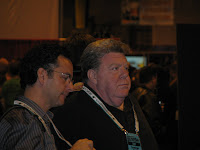 We poured our Golden Grizzly Ale and our Glacier Select Oktoberfest at our booth. I'm proud to say that we emptied all the kegs we shipped down and received very positive f 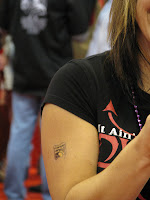 eedback from everyone who sample them! We even got an offer to s 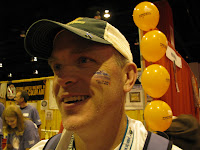 ell our beer in New York (not sure how we'd get it out there though). We also gave away hundreds of temporary GBC tattoos! That was quite surreal to see complete strangers clambering over each other to stick one of our “FILL TO HERE WITH BEER” tattoos to their foreheads! We were one of a handful of breweries offering tattoos. Fun to see the Golden Grizzly Ale tattoo on peoples arms, necks, cheeks, and, uh, “other places” along with other craft breweries. The crowds were amazing. 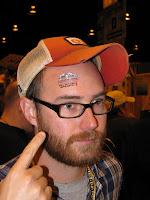 We were standing in one of the largest rooms I've ever been in (outside of an airplane factory) and we were shoulder-to-shoulder at times! Some of the most bizarre variations of the human genome were encountered there. We saw a flock of penguins, several Oktoberfest girls, a gaggle of nuns, a cowboy riding an inflatable horse, Elvis, Hellraiser, two referees who threw their penalty flags every time someone dropped their glass, and more than a couple of, uhh, alternatively-clothed individuals! That's another funny characteristic of this fest; whenever someone dropped their sample glass (and it happened quite often), the entire crowd around that person would yell “WHHOOOOOO!!!” followed by “What an idiot!”. All in good fun.

I'm finding I'm surprisingly anxious to get back to my brewhouse and begin to further refine my recipes for next year's competition. Not sure which ones I'm going to work with but I'm pretty sure one of them will be the Slurry Bomber Stout. Can't let that one get away!

Posted by Glacier Brewing Company at 7:05 PM No comments:

Moving into fall. Life and times in northwest Montana are definitely moving towards cooler days (and colder night), dropping leaves and playful winds.
In the brewery, Will and I are STILL moving like crazy cogs in an insane machine to meet production demands. Our Kalispell distributor, Flathead Beverage, are moving our beers like mad! They are saturating northwest Montana with Glacier Brewing six-packs and draft beers. This is almost surreal for me. My family and I lived in the Flathead Valley when we were first starting our brewery. So we became very familiar with the businesses in that area. To see our Golden Grizzly Ale on tap at Woody's at Highway 2 and 35 or available in six-packs at the Blacktail Grocery in Lakeside is a very, very funny and neat experience for me.
I took a few days to explore some other beers available in our region of the country (it's always good to see what other brewers are doing). My family and I went from Polson to Seattle to Birch Bay (Google it!). I sampled some unique, imaginative, bland, overrated, underrated, good beers. Whenever I sample other brewery's beers, I always mentally put them next to mine; how is the malt/hop balance, how does the carbonation level feel, is the advertised style there, how would I make this beer? These sort of trips are always good to re-stoke the creative fires. And, I will admit, after a manic summer in the brewhouse, I love to get the hell out of Dodge!!! Even for just a few days.
We're heading back today, I hope to encounter a few more local beers along the way. We'll see.

Our Wild Wolf Wheat is pouring at a healthy clip in the tasting room but we are almost out of it! What specialty beer would YOU like to see in the GBC Tasting Room? I have some ideas but I'd love to hear from our drinking public.

until next time,
I remain,
Your Humble Brewer
Posted by Glacier Brewing Company at 9:24 AM No comments: