State Of The State 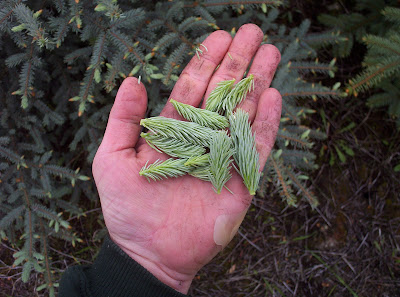 Unless, you've been living under a log lately, you have probably heard about the "HOP CRISIS" (I use capitals so you understand the importance!!). If not it goes like this: the hop suppliers have been sitting on a hop surplus the past few years, this surplus has artificially driven the price of hops down, breweries have been buying these cheaper hops, the hop farmers can't meet the payments on their John Deere so they either: A)Get our of hop farming or B)they stay in hop farming but don't expand their planted acreage. Either way, the surplus gets used up due to increased demand. Oh yeah, world-wide hop harvest get decimated by diseases, drought, too much rain, or all of the above. Once again, whatever the cause the result is the same: Crappy Hop Harvests! So now, the average price of hops (if you can find any to buy) has gone from about $4.80 per pound to about $39.00 per pound. Let me type that out so there is no misunderstanding: four dollars and eighty cents per pound to thirty nine dollars per pound!!!
WTF!!!

Never before has the modern beer industry been faced with such an attack on one of their principles: hops! Toss into this whole mess the federal government's REQUIREMENT that breweries are to include hops in their beer for it to be considered beer at the rate of 7 pounds per 100 barrels (one barrel equals 31 gallons). Because breweries large and small are "allowed" to manufacture beer by the federal government and beer is defined by said entity as having seven pounds for every 100 barrels, it does feel like the small brewery's hands are somewhat tied. There are over 30 other plants besides hops that have been used to bitter beer but they have not be "recognized" by the feds as being an ingredient in beer. Myself, well, I'm looking at supplementing our hops supply by brewing a beer with some hops AND spruce tips.

These are the new growth of Colorado Blue and Green Spruce Trees. I'm new in the whole "spruce tips" world but I'm very curious to see how my test batch of "spruce beer" turns out.
Oh yea, I'm also entertaining ideas for our next specialty brew. Please understand that it won't be an IPA or anything else really hoppy. Sorry, just not gonna happen. If you have any thoughts, tell me or email me or call me or slip a note under the door.
Well, the brewhouse has already started to heat up for the summer; freakin' roasting in there. So I guess we're on that seasonal treadmill once again!
Until next time,
Your Humble Brewer
Posted by Glacier Brewing Company at 7:58 PM No comments: Links to this post 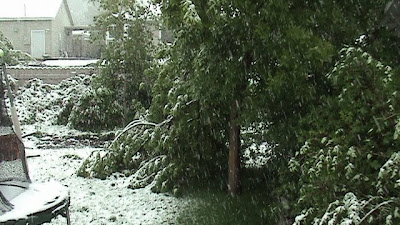 Believe it or not, this picture was taken the morning of June 11, 2008. We awoke, here in Polson, to a building springtime blizzard. In a matter of 20 minutes, the rain turned to sleet and then VERY heavy snow. The trees accumulated a quick coating and, SNAP! Down came the bigger branches. One of the remarkable things about this weather was that it stuck around! The snow didn't melt that day or the next. The skies stayed overcast, low and gray. I was surprised with the tangible feeling that pervaded my attitude and almost everyone I meet those two days.

We were all feeling more than a little cheated. We'd gotten through this winter weather already. Winter was over. We've earned our sunshine and warmth and singing birds! NOT FAIR!!! Well, yesterday the warm winds blew, the sun shone down and the snow melted, mostly. Our surrounding mountains are still locked in late-winter, snow-pack has returned. I guess the next event will be to watch for the rapid melt-off. Our ground feels extremely saturated. I understand the gates on Kerr Dam are already open and roaring. This was before this storm. If you're in the area, check out the dam. It's quite an impressive show when it's roaring the way it is now.
Until next time,
Your humble brewer
Posted by Glacier Brewing Company at 7:05 AM No comments: Links to this post 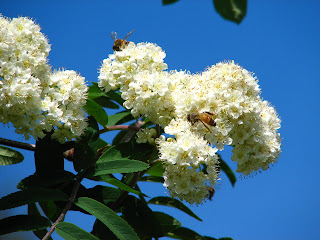 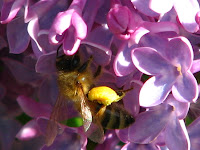 . This year's seasons definately seem to be marching a very strange, start-stop, sort of progression. Our winter was long and very drawn-out. The springtime seemed to last about four days (interupted by more winter), now we're into summer but only in the afternoons, the mornings are still in early spring! Whatever, I'll take it! Diversity sharpens the senses, quickens the blood. You're never quite sure what the afternoon will bring, or the next morning or the weekend. Growing up in western Colorado, now known as eastern California, 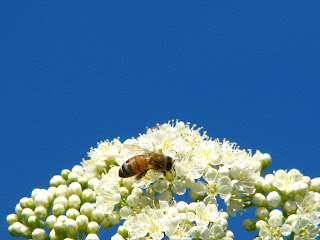 once winter and mud season was over, you could lay down a certain bet that the day would start with blazing blue skies, followed by white puffy clouds around 2:30pm and then building into isolated thunderstorms by 4:00pm. The evenings would always be gorgeous blue again. All my friends loved this weather. I grew more and more irritated by the endless blue days (not just summer, ALL YEAR!). 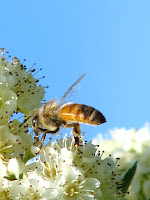 I craved weather variety, the chronic "wonderful blue sky" was smothering me with sameness! This psychotic, helter-skelter weather of northwest Montana is truly WONDERFUL!

Until next time,
Your humble Brewer.
Posted by Glacier Brewing Company at 6:08 AM No comments: Links to this post