Brewing On The Shoulders Of Giants

Of course, in the spring and summer months, I brew a hell of a lot.
Most days, actually.
To be completely honest, I don't do this much brewing out of a insatiable craving to create wort for the yeast. The heat can become crushing. Mixing cracked barley, wheat, and 170°F hot liquor (aka. "hot water") in the mash tun for 40 minutes and then hovering over the boiling brew kettle (°208F) like a mother robin for 90 to 120 minutes, then crawling into the freshly-emptied mash tun to clean it can be heat-stroke inducing work. Especially during these warm months. The ambient temperature in our brewhouse during a typical workday can easily exceed 85-90°F. Nevermind the relative humidity created by these steaming, giant, stainless steel vessels! Somewhere around 75-83%. Yup. Good times.

Anyhoo, the reason to brew so much is directly related to our market demands. This is what I call "The Pull". As in "How hard is The Pull from our distributors this week?". If we need to entice our distributors to sell more of our beers and sodas (which doesn't happen much at all, thank goodness!), I call that "The Push". As in "How can we increase The Push to the market?". Aren't semantics fun?

As I've said, I have been brewing a lot. During these sessions I find my mind wandering to interesting corners. Recently, I caught myself trying to walk in the shoes of George Washington, Benjamin Franklin, and Thomas Jefferson. I was not trying to channel the statesmanlike qualities of these gentlemen, rather I was hoping to embody the brewing prowess that was possessed by these "Forefathers Of Brewing".
Yup, our country's forefathers were all passionate brewers. They understood that the production of, and consumption of, beer was such an integral and important part of the culture of our fledgling country. Almost every township, city, villa, and hamlet had their own brewery or two or three. Our country's first president, George Washington, had his own beer recipe. Well, he probably had quite a few considering he was considered to be an expert in the craft!

This is the text from one of his surviving recipes:
"To Make Small Beer
Take a large Siffer [Sifter] full of Bran Hops to your Taste. Boil these 3 hours then strain out 30 Gall[ons] into a cooler put in 3 Gall[ons] Molasses while the Beer is Scalding hot or rather draw the Melasses (sic) into the cooler & St[r]ain the Beer on it while boiling Hot. let this stand till it is little more than Blood warm then put in a quart of Yea[s]t if the Weather is very Cold cover it over with a Blank[et] & let it Work in the Cooler 24 hours then put it into the Cask—leave the bung open till it is almost don[e] Working—Bottle it that day Week it was Brewed."


As I imagine Washington, Sam Adams, Jefferson, and Franklin laboring over a boiling brewkettle, my mind would wander to another corner. This time, to THE symbol of our great nation:
The Stars And Stripes.
Ole' Glory.
Our Flag!

The song (originally a poem) "The Star-Spangled Banner" is, of course, our national anthem paying tribute to that beautiful flag.
Interesting thing about that flag though.
The flag that was seen by Francis Scott Key
The "Flag-Was-Still-There" Francis Scott Key.
THAT very flag owes it's existence to.........wait for it...........
A BREWERY!

This flag was made to be huge. Fort McHenry's commander, Maj. George Armistead, Commodore Joshua Barney, Brig. Gen. John S. Stricker wanted a flag "so large that the British will have no difficulty in seeing it from a distance." It was 30 feet tall by 42 feet high. Each star was two feet wide from point to point! It used 400 yards of best quality wool bunting and cost (in materials at the time) around $405.00! The lady tasked with making this flag is none other than one Mary Young Pickersgill of Baltimore.

Pickersgill was aided by her 13 year old daughter Caroline, three nieces, a free African American Slave as well as an African American slave (I know, "Ironic"). They stitched together the pieces they could in their small workroom and upstairs bedroom, but they needed more space. Across the street was the Claggett's Brewery. The stitched-together segments were laid out on the huge malting floor-space of the brewery. It was there, in this brewery, that the flag which inspired our National Anthem was finally assembled!

We are lucky enough to be alive in this great land during such a wonderful expansion of the craft brewing world. Every small brewery you visit is a direct representation of that original spirit of freedom and enterprise. The next time you are enjoying a pint at your local tasting room and that sweaty, rubber-boot-wearing, tired-looking person wanders out from the brewhouse, stop, put down your pint, and thank them for continuing the passions of our country's founders! 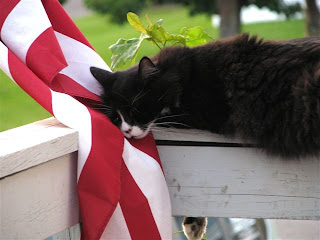 I wish everyone a peaceful and happy Fourth Of July!

Until next time I remain,
Your Humble Brewer

Posted by Glacier Brewing Company at 8:18 PM No comments: