Is that a poisonous snake in your pocket...... 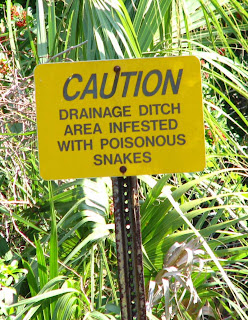 Wouldn't it be great if all the dangers in life came with such obvious warnings? This is a sign I saw across from the parking area at the Kennedy Space Center in Florida when we went to watch the Space Shuttle launch (it didn't launch, still hasn't). It struck me as amazing how close people down there life with creatures such as the poisonous snake, alligators, snapping turtles, and all the other life-ending animals. On the heels of that thought I had another (I know, TWO in one day!), I wonder if Floridians feel the same amazement at how Montanas can live so close to grizzly bears and mountain lions. Both populations feel that their personal living situation is normal, with the other living situation being out of whack! I guess this is the basis of why microbreweries can provide such a unique and necessary niche: people from different backgrounds, living in different areas, do not share a homogeneous appetite. I know this flys in the face of the "McDonald's" business plan ("The exact same hamburger no matter what McDonald's you visit."), but I do believe that local populations thirst for, well, local flavor! I try to make a point of seeking out the breweries of any area I visit. I've found some wonderful beers in some out-of-the-way places, I've also found some horrible swill that the brewery claims they can't make quick enough. Either one is always an adventure and offers me some strange insight into that local culture. I wonder what people visiting Glacier Brewing think about Polson's culture? 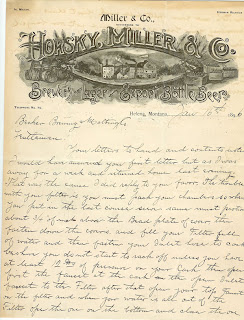 A couple of summers ago, I got the honored and unique opportunity to accompany Steve Lozar (a.k.a. Bubs) on a very early morning trip to Helena to examine several boxes of "recently discovered" letters from Nicholas Kessler, founder of Kessler Brewing of Helena and the Kessler Brickworks of Helena. Not only was the quantity of the artifacts unusual but the subjects they covered. We found letters to Nicholas Kessler from bar owners, other brewery owners, brewers, friends. We even found a poem that was written on the backside of letterhead for the Montana State Brewer's Association. This poem was written by Nick Kessler's young son and it was about why his dad was so much fun! What a fantastic glimpse into the day-to-day from over one-hundred years ago!
This letter from Horsky, Miller & Co. caught my eye on Ebay. One reason is because of the wonderfully ornate letterhead. But also because it was written in 1896 and above the letterhead it reads "Miller & Co.". Before that trip, I had no idea Miller had such humble roots or such old ones. Kinda' makes me wonder what GBC is gonna end up as!
Posted by Glacier Brewing Company at 11:00 AM